This tutorial will teach you how to setup a DC motor with the Satellite boards built-in Mosfet and how to control the motor speed using Serial input.

For this tutorial we are going to use Arduino pin D9~. 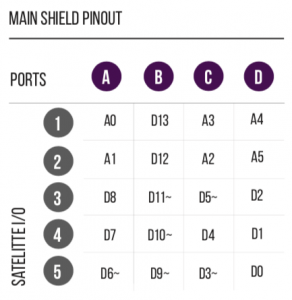 D9~ pin can be accessed on either Satellite I/O 3 on Port A or Satellite I/O 5 on Port B. Place PWM Select jumpers in the default Up position so that D9~ is available on Port A.

Before we get started, take a look at the Pin Configuration Chart. 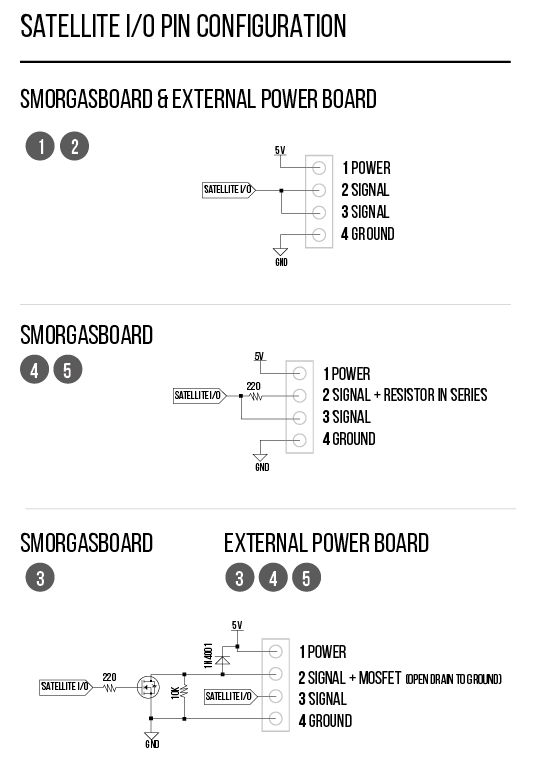 Both the Smorgasboard and External Power boards have a built-in Mosfet, which is a type of transistor meant for actuators that require more power than an Arduino digital output can handle directly.

The Arduino can only provide 40mA at 5V on its digital pins. Most motors require more current and/or voltage to operate. A transistor can act as a digital switch, enabling the Arduino to control loads with higher electrical requirements.

With a mosfet, you have an “in” called the Source, an “out” called the Drain, and a “control” called the Gate. When you send a HIGH signal to the gate (Signal pin), the transistor switches and allows current or voltage to flow from the source (in) to the drain (out). Ground is connected to the transistor’s drain. A pull-down resistor holds the gate low when the signal pin is LOW.

When working with actuators that have a coil (DC motors, relay, solenoid), it is also important to use a “snubber” or “flyback” Diode, which is a diode used to eliminate negative voltage spikes when power is suddenly reduced or removed.

To prevent damage to the Mosfets on your Satellite boards, the latest versions now include a diode and a pull-down resistor to complete the circuit. For older versions, you must use a diode in parallel with the motor (between screw terminal pins 1 – power and 2- signal) and a 10k pull-down resistor (between screw terminal pins 3 – direct signal and 4 – ground). 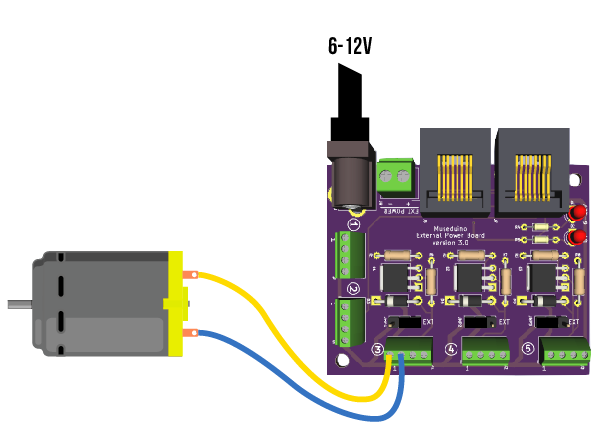 This circuit is okay to use with a 5v hobby motor. For motors requiring 6v or higher, use External Power.

This tutorial uses Pulse-width modulation (PWM) to simulate a variable supply voltage. The voltage supplied to a DC motor controls its speed.

Upload the sketch and open the serial monitor to set a motor speed value of 0 to 255.

Want to control the speed of the motor with an Analog input? Go to the next tutorial.